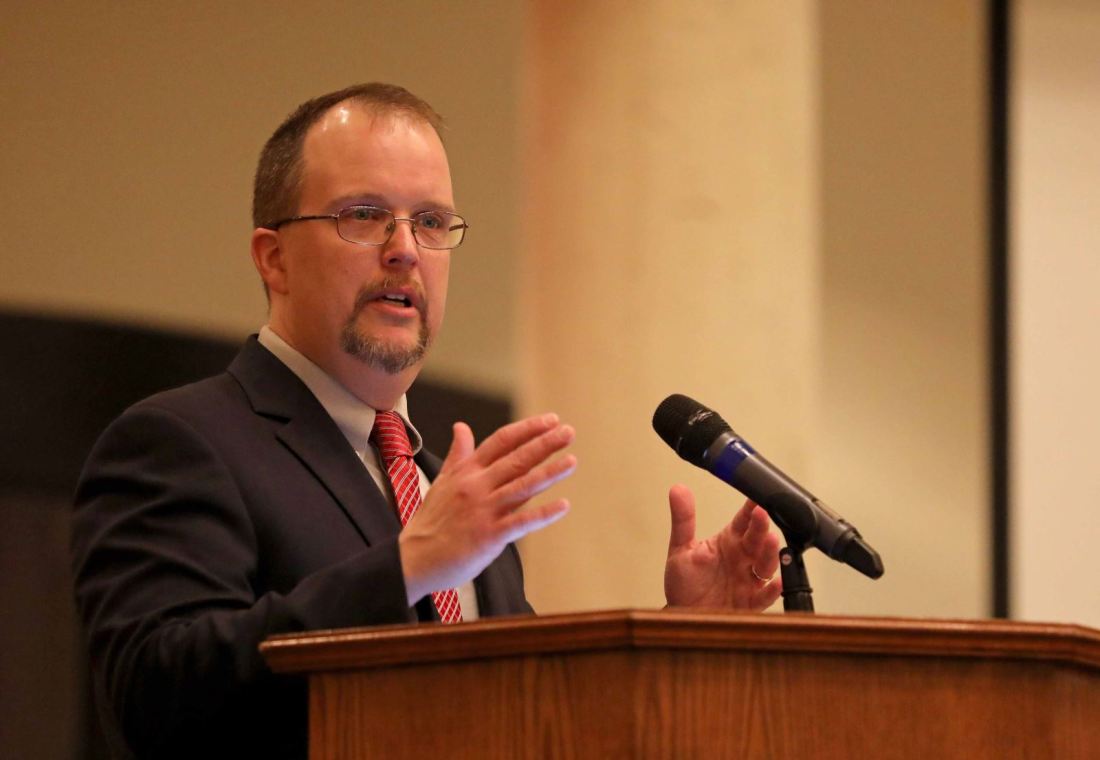 If anyone led with joy, it was Dr. Ray Robinson. He was my professor at Palm Beach Atlantic University from 1992 to 1994. Below is the transcript of the talk I gave that their Founder’s Day back on April 4.

Words cannot begin to express how grateful I am to be here today.  Palm Beach Atlantic University has always been foundational and formative to everything that has come afterwards.  Dr. Mims, thank you so much for the kind introduction.  After I graduated, I left for Kentucky to attend seminary, back to South Florida, back to Kentucky to pursue studies after God called me into the preaching ministry, and now for the last 5+ years have made my home in Denver, Colorado.  I am geographically far away from PBA, but PBA is never far away from me.  And while Ray Robinson may be away from us, all that he taught us and meant to us is very near to us.

Would you please take your copy of God’s Word and turn to Philippians 1:3-6.

I thank my God in all my remembrance of you, always in every prayer of mine for you all making my prayer with joy, because of your partnership in the gospel from the first day until now. And I am sure of this, that he who began a good work in you will bring it to completion at the day of Jesus Christ (Philippians 1:3‭-‬6 ESV).‬‬

All of us risk making our residence in remembering.  We as alumni who loved PBA (or any other academic institution) risk making our residence in remembering, only looking in the rearview mirror, and never move on. And that’s a testimony to this place and the people who make up Palm Beach Atlantic University. But almost 25 years removed from graduating from here, I saw that Ray Robinson wanted us to move on, to grow, to live, to pursue God’s specific will for our lives in finding our life’s work, but also to pursue His general will for all—our sanctification, that we see that Jesus is enough in all of life.

But we must remember to look at where God has taken us.  As far as my academic journey, Palm Beach Atlantic was my last shot.  You see, before I came to PBA, I was an average student who became a terrible student. I was academically and in many ways spiritually directionless and began to borrow other people’s will for my life rather than God’s will. I knew He wanted me in His service, but I felt I had to get some things straightened out.  But when God calls, He calls.  And He gives strength to step out.

I first visited PBA in October 1991. I had just come home from washing out in my former major and was working as a janitor at the Florida Power Corporation where my father worked. My former pastor and PBA alum Chris Whaley and I drove down.  I had just turned 20. As soon as I set foot at PBA, I knew two things (1) this was where God wanted me, and (2) this was my last shot academically.  It was a strange combination of how this had to work out, but was going to work out.

I met professors such as the remarkable Marlene Woodward-Cooper, Bob Burroughs, Gordon Longhofer, Anna Keith, Susan Joyce, Timothy Steele, Michel Simoneaux (the dean at the time), and a number of others.  But one man stood out:  Dr. Ray Robinson.

All of us have professors that stood out for various reasons.  Some may be forces of nature. Some may exude an intellectual prowess. Some may be, well, quirky and a bit eccentric.  Imagine having all three in one person, and you have Dr. Ray Robinson.   But God used Ray Robinson to help sanctify me and be used by God to move me along to what God started –moving me toward Christlikeness.

The first time I saw him in action was during a class all music students had to take: Oratorio Chorus.  At the time, Oratorio was from 7-9:30 on Monday nights at an area The purpose of the class was to learn a classic extended work, such as Mendelssohn’s Elijah, Schubert’s Mass in B Minor, Rutter’s Requiem, Handel’s Messiah, and the like.

Little did I realize what God was up to.  When Jesus rescues us from our sin, He begins that work of sanctification in us. He uses His Word, His, Spirit, and His church. And he also places people in our lives who model for us and invest in us in ways we do not appreciate until some more miles are in that rearview mirror. I focus on three.

Enthusiasm.  The word enthusiasm comes from two parts meaning ‘in God’ (you see it—en theos), showing a divine inspiration. He exuded passion for his craft. And this passion became contagious. When I first walked in to Oratorio Chorus in February of 1992 (25 years ago), within about 10 minutes I began to wonder who this conductor was!  This wasn’t just a job.  He wasn’t just earning a paycheck.  And believe me, students can sniff this out from a mile away.
When I first sat in Oratorio Chorus, I would see how passionate he would be about the work.  About 15 minutes in, I thought, “Who is this man?”  He didn’t look like a young man, but his energy ran circles around all of us in the room combined. Even with 50-60 people in the room, he knew what we were up to.

Excellence:  President Fleming reminded us at an Alumni event this past Sunday night of Dr. Robinson’s pursuit of precision and his pursuit of excellence, right up until the moments before an Oratorio concert… even to the point of delaying the entrance of those who came to see us perform.  As he spoke of this, I remembered 1 Corinthians 10:31: “So, whether you eat or drink, or whatever you do, do all to the glory of God.”

He wouldn’t let us slide. He so much wanted us to see the privilege we had of doing these works and wanted to pull the best out of us.  I remember, again at first, when we were in the middle of the semester—removed from the newness, but still a ways away from the performance, our enthusiasm waned.  He would be frustrated and motivated, with all these varying emotions cascading down to where he would make these utterance and noises, like he was speaking in tongues.  “Hey.  Lookit. Hey now.” How something could be so serious and so humorous all at once.  But it focused us.  Excellence. Never letting down.  Looking through the windshield.  Sanctifying.

Excellence in study. He helped me in my preaching.  You see, Dr. Robinson unwittingly taught me some aspects of homiletics and hermeneutics.  Commitment to the author’s intent. Whenever we would learn a new work by Bach, Beethoven, Schubert, Mendelssohn, Faure, Brahms, or Rutter (to name a few), he would spend time telling us about the composer, when he wrote the work, why, the timeframe—really, the whole history.  Why?  Every piece of this information played into the interpretation of the piece.  He so much wanted us to understand and abide by the composer’s intention.

That helped me in my preaching.  Just as it wasn’t up to me to determine how I preached.  Study. Find out about the author, the times, the reason why he wrote what he wrote, and get as close to what the ultimate Author intended.  He drove him the understanding that “All Scripture is breathed out by God, and is profitable for teaching, reproof, for correction, and training in righteousness, that the man of God may be complete, equipped for every good work” (2 Timothy 3:16-17).

Engaged with his students. His priority was “his kids.” He didn’t just want choir members to make the music, but he wanted the music to be a tool to help make the members.  And not just to uber talented ones.

Dr. Robinson cared about me as a man.  He cared about me as a person.  He cared about my soul and our souls. When any of us blew it, you could tell it broke his heart.  When we succeeded, he cheered us on.  When we found out that he loved seeing us start off our recitals with Bach, we started off our recitals with Bach.
“He who began a good work in you will be faithful to complete it on the day of Christ Jesus.”  For believers, Jesus has rescued us from our sin through His death and resurrection from the dead. He leaves us here to work through us, yes, but also to work in us.  By the Word, the Spirit, His church, and through men and women pouring into us, He works.  And did He ever work through Dr. Robinson.

I wish I could tell him now all that he meant to me.  But due to our hope in Christ, we will see each other again, and I shall tell them.  But for all of you who have had someone who has meant a lot to you–a parent, friend, professor, whoever–tell them while you can.  You never know how much time you have left.

May we all have the enthusiasm, the pursuit of excellence, and a willingness to engage that work with us and for us. Thanks, Dr. Robinson.  God used you.  God knew I needed you in my life.