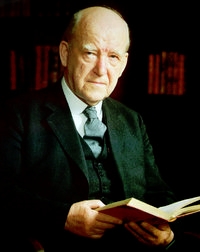 “I gave up nothing [a promising medical career]; I received everything. I count it the highest honor that God can confer on any man to call him to be a herald of the gospel.”

Who said this? Why, none other than Dr. D. Martyn Lloyd-Jones (1899-1981) — one of the greatest preachers of the 20th century! In fact, a wonderful treasure of his life and work can be found at the Martyn Lloyd-Jones Trust. When one hears this wonderful man of God preach, we understand how Christ had captured Him — how the Word of God gripped him to the glory of God!

I highly recommend to you a wonderful volume by Dr. Lloyd-Jones called “Preaching & Preachers.” He writes:

“The work of preaching is the highest and greatest and the most glorious calling to which anyone can ever be called. If you want something in addition to that I would say without any hesitation that the most urgent need in the Christian church today is true preaching; and as it is the greatest and the most urgent need in the Church; it is obviously the greatest need of the world also. . . . Is there any need of preaching? Is there any place for preaching in the modern church and the modern world, or has preaching become quite outmoded? The very fact that one has to pose such a question, and to consider it, is, it seems to me, the most illuminating commentary on the state of the Church at the present time” (p.9).

“But whatever gain I had, I counted as loss for the sake of Christ. Indeed, I count everything as loss because of the surpassing worth of knowing Christ Jesus my Lord. For his sake I have suffered the loss of all things and count them as rubbish, in order that I may gain Christ” (Philippians 3:7-8, ESV).

By the world’s standards, Paul gave up everything: wealth, worldly intelligence, status, and an unbelievable heritage. All those things that the world put in Paul’s credit column of the ledger that was his life is now in his debit column. What’s left to Paul’s credit? Only Christ. Paul, like Lloyd-Jones, gave up nothing (I should say, Lloyd-Jones like Paul gave up nothing).

I hope this will springboard your look into Dr. Lloyd-Jones’ life and ministry — it will be well-worth your time, I promise you!