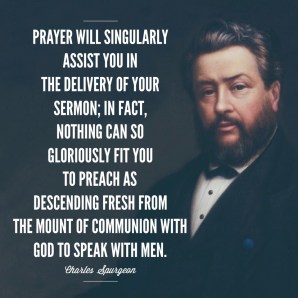 The apostle Peter mentioned prayer first, and for good reason. Preaching is a supernatural act!  We are not simply dumping information, we are praying for transformation through what God has said.  A.J. Gordon noted:

Our generation is rapidly losing its grip upon the supernatural; and as a consequence, the pulpit is rapidly dropping to the level of the platform. And this decline is due, more than anything else, to ignoring the Holy Spirit as the supreme inspirer of preaching. We would rather see a great orator in the pulpit, forgetting that the least expounder of the Word, when filled with the Spirit, is greater than he. (1)

While some look at the power of preaching coming from a certain type of personality, a certain twist of a phrase, being a stand-up comic that intersperses Scripture in from time to time, or other human-driven motives and methods, preaching is a supernatural act that needs bathing in prayer. D.L. Moody got it right:

I’d rather be able to pray than be a great preacher; Jesus never taught his disciples how to preach, but he did teach them how to pray.

How? Although each of these deserves a longer treatment, let’s quickly look at these four matters:

Through prayer, God invests in His people, especially His preachers.

Christ is the one who sends out His preachers to whom and where He sends.  In Matthew 10, Jesus sent out the twelve, “instructing them, ‘Go nowhere among the Gentiles and enter no town of the Samaritans, but go rather to the lost sheep of the house of Israel. And proclaim as you go, saying, “The kingdom of heaven is at hand”’” (Matthew 10:5b-7).  Later, Jesus tells them to “Go, make disciples of all nations” (Matthew 28:19) and that “you will be my witnesses in Jerusalem, Judea, Samaria, and to the ends of the earth” (Acts 1:8).  It was here that the Holy Spirit came upon the 120 meeting in the upper room in Jerusalem, where they were given the Word and the languages to make that Word understood (Acts 2:1-4). By the Holy Spirit, men are called to preach and lead God’s people.

Through prayer, God illumines the Word.

But, as it is written,

“What no eye has seen, nor ear heard,

nor the heart of man imagined,

what God has prepared for those who love him”—

these things God has revealed to us through the Spirit. For the Spirit searches everything, even the depths of God.

In verse 13, Paul goes deeper: “And we impart this in words not taught by human wisdom but taught by the Spirit, interpreting spiritual truths to those who are spiritual.”

Through prayer, God opens up hearts to rescue His own.

Just a little later in 1 Corinthians 3, Paul explains the roles of preacher and Trinity:

5 What then is Apollos? What is Paul? Servants through whom you believed, as the Lord assigned to each. 6 I planted, Apollos watered, but God gave the growth. 7 So neither he who plants nor he who waters is anything, but only God who gives the growth. 8 He who plants and he who waters are one, and each will receive his wages according to his labor. 9 For we are God’s fellow workers. You are God’s field, God’s building (1 Corinthians 3:5-9).

The preacher plants and waters. “Oh, if we had a preacher who ___________, then many would come to Christ.”  How would we fill in that blank?  Was serious? Funny? Handsome? Young? Old?  These items are not mentioned as qualifications for the preacher, as if these items assisted God’s saving work.  The qualifications of 1 Timothy 3:1-7 suffice, and one who preaches “the gospel of grace” and one who does not “shrink from declaring to you the whole counsel of God” and pays “careful attention to [themselves] and to all the flock, in which the Holy Spirit made you overseers, to care for the church of God, which he obtained with his own blood” (Acts 20:24, 27). By His strength, we stay faithful to what He has clearly called us to. By His Word, He opens up hearts to receive and grow in His Word.

Jesus came to earth, “save his people from their sins” (Matthew 1:21), and how will this happen without a preacher sent (Romans 10:14-15)?  Preaching is a supernatural act in a natural world to bring the natural into the supernatural by Jesus.  Here my pastor, Charles H. Spurgeon (1834-1892):

To us, as ministers, the Holy Spirit is absolutely essential. Without Him our office is a mere name. . . . Unless we have the spirit of the prophets resting upon us, the mantle which we wear is nothing but a rough garment to deceive. We ought to be driven forth with abhorrence from the society of honest men for daring to speak in the name of the Lord if the Spirit of God rests not upon us. . . . If we have not the Spirit which Jesus promised, we cannot perform the commission which Jesus gave. (3)