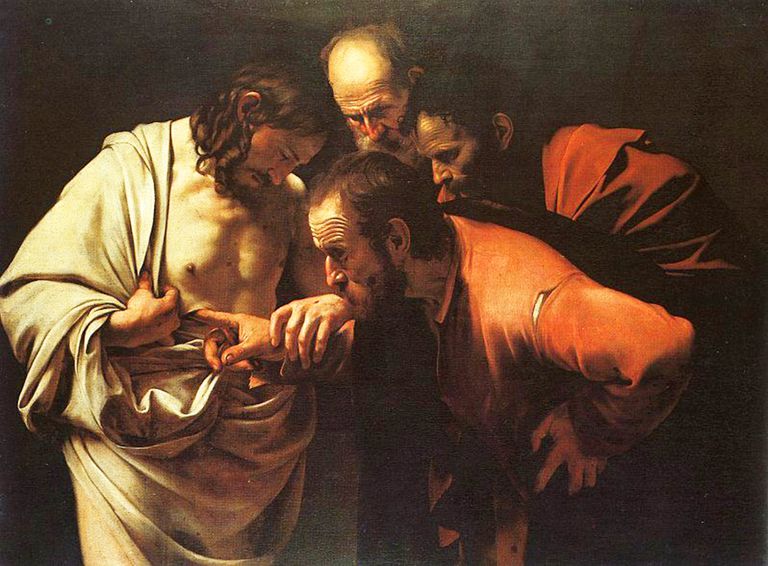 ‘The Incredulity of Saint Thomas’ by Caravaggio. Public Domain

On the first day of the week when Jesus rose from the dead, word got out that the women had not only seen the empty tomb (complete with the stone rolled back, knocked out guards, and an angel asking them why they were seeking the dead among the living—“He is not here, for He is risen!”—Luke 24:5).  Peter and John came to the tomb, and Peter even went inside.

In John 20:19-23, they all saw Jesus—except for Thomas.  When Jesus appeared to them, what were they doing?  In verse 19, it says that the doors were locked.  Why?  If we were writing a story, the heroes of the story would be brave and strong!  Here, the disciples—who had been with Jesus for three plus years, seen him do miracle after miracle and stand up to the opponents—had seen this man brutally executed on a Roman cross.  Why?  Simply because they did not like His influence.  He had been sent from God as promised to deliver them from their sin and to give them life, but as another Scripture said, “He came unto His own, and His own did not receive Him.”

One of the disciples was not with the others—his name was Thomas.  If you’ve been in church world any amount of time, he has one particular moniker attached to his name:  “Doubting Thomas.”  But I believe he was just like the others—they locked themselves up even after they saw Jesus (see 20:26).

Yet, in reality, Thomas’ problem was not doubting, but unbelief—for Jesus told him as much (v. 27).  But what was Thomas’ issue:  “Unless I see in his hands the mark of the nails and place my finger into the mark of the nails, and place my hand into his side, I will never believe” (v. 25).  Thomas wasn’t a doubter in the sense where he said, “I won’t believe—I cannot believe.”  He said, “I need some proof on this!  I saw him arrested by the authorities, delivered to the crowds, and die!  Unless I see those marks, that is the only way that I will know that this is Jesus and not some imposter.”

A number of things to look at here.

First, he should have been with the apostles before when they saw the Lord.  God commands us not to neglect meeting together as is the habit of some, but to stir up one another to love and good works as the Day is approaching” (Heb. 10:25).   Another way to put it is this way:  you don’t want to miss our times together when God shows up!  And when they saw the Lord Jesus, God showed up!

So a week later (yes, it says eight days later in v. 26, but they count the day they are in as well, so it was from Sunday to Sunday), they gathered and Thomas was with them.  As Jesus had done before, he did again:  the doors were locked, and Jesus came and stood among them.  In another passage, we see that he even ate among them—so He was in an actual body.

Did Jesus walk up to Thomas and chastise him for his unbelief?  Did he shove His teachings down His throat, saying, “Thomas, I told you over and over and over again!”  Thomas heard the witnesses, He remembered  the teachings—but He needed an encounter with the One to whom they bore witness, the One who spoke those teachings!  But who initiated the encounter?

Verse 27:  “Then he said to Thomas, ‘Put your finger here, and see my hands; and put out your hand, and place it in my side.  Do not disbelieve, but believe.’”  Jesus came to Thomas, and without having any interaction with Thomas, went right to the very issue with which Thomas was struggling—the very issue that He dealt with Jesus confronted him with.

Did Thomas even put his hand in the scars?  Maybe, maybe not—we don’t know.  But we do know it’s not recorded.  But Thomas responded in a way that may surprise us!  Thomas went from doubter to devoted.  He went from unbelief to fully committed believer.  “My Lord and my God!”  Whenever any other supernatural being was worshiped by another, that heavenly being would stop them from worshiping—“I’m not Deity—stand up!  Worship God!”  Jesus, as God the Son, received that worship.

… and then He speaks to us!  “Have you believed because you have seen me?  Blessed are those who have not seen, and yet believed.”  This is for us.  We do not question whether Abraham Lincoln exists, but I doubt anyone here is over 148 years old.  Same with Washington, who died 214 years ago.  Historians know that Jesus existed, whether they were believers or not.

But it’s not about whether Jesus existed—it’s about whether you’re exalting Him.  Do you believe?  John 20:31 says that by believing, you may have life!  Christ died as an atonement for your sins, loving you enough to remove the separation that our sin put between us and God for all who would believe.  There’s no lock so tight, whether in a door or in our heart that can keep him out.  Thomas Watson said, “We are more sure in Christ to rise from the grave than to rise from our bed.”  Do you have that confidence?  The cross is bloody, and the tomb is empty!  What is the condition of your soul?  Surrender to the risen Lord Jesus today!